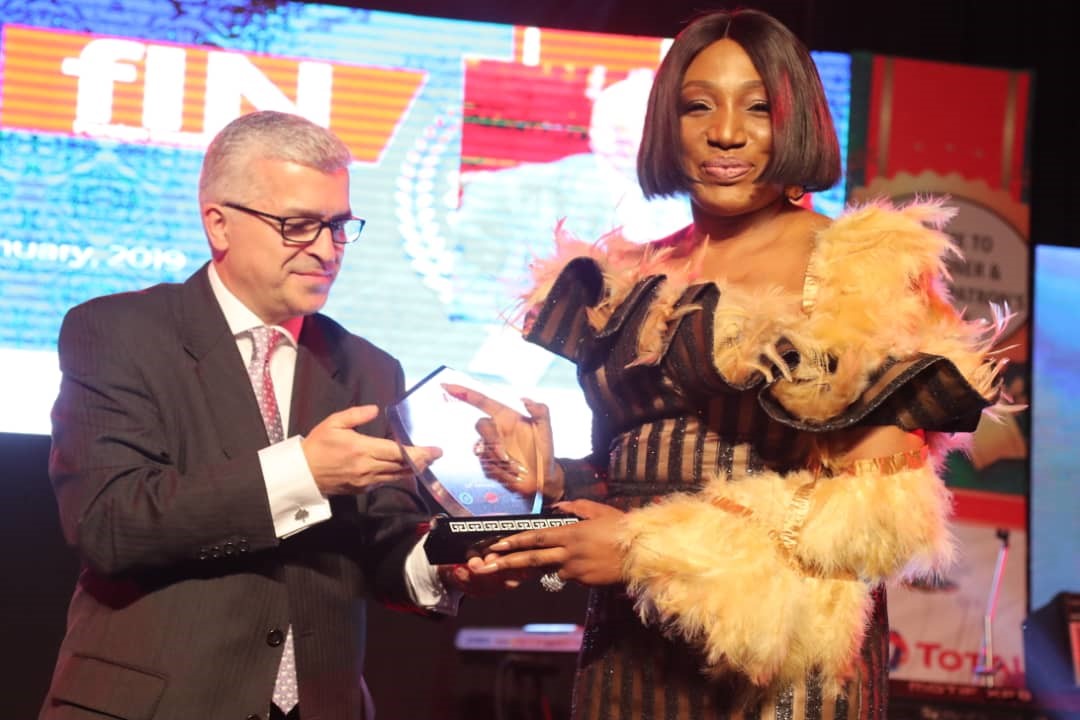 The award is an acknowledgement of Peters’ significant contribution to oil and gas development in Africa, his visionary leadership, distinguished service and transformational disruption of a sector dominated by International Oil Companies.

The Aiteo Group’s 20 year evolution through Africa’s Oil and Gas sector has been exemplary as well as revolutionary – going from a downstream start-up to becoming a leading integrated energy conglomerate with strategic investments in hydrocarbon (or commodities) exploration and production.

Speaking at the award ceremony, Michael Dragoyevich, Chief Executive Officer of Foreign Investment Network remarked, “Mr Peters has earned a unique honour to stand out among his peers as winner of the coveted FIN African Icon of the Year Award.”

Dedicating the award to all Aiteo employees worldwide, Benedict Peters said “The award by FIN as its African Icon of the Year is awe-inspiring. It’s an honour to receive this type of recognition. Our modest efforts to provide Africa’s market places with top-quality energy solutions while being a reference point for indigenous capacity in oil and gas have clearly paid off, and we are proud of the fact that we continue to receive such prestigious distinction.”

Mr Peters ventured into the oil and gas sector as an entrepreneur in 1999 and initially traded mainly in the downstream sector. In 2015, his company, Aiteo won the bid for the largest onshore oil block in sub-Saharan Africa.

Beyond oil, Mr Peter’s group has investments in mining, agriculture, infrastructure development, electricity generation and distribution,  with a fast-developing retail distribution network. It is focused on serving the needs of communities across the continent, by leveraging a unique combination of a strategic asset base, technology, innovation, and some of the best technical and business minds across the industries it serves. The group has been expanding rapidly, extending its transformational operations to different countries across Africa and Europe.

Peters is passionate about youth empowerment and has donated generously to support football on the African continent. Through Aiteo, he sponsors the Nigerian Football Federation, Aiteo CAF Awards, Aiteo Cup (The Federation’s foremost Cup in Nigeria) and a team in his company’s host community. He has also assisted thousands of internally displaced persons in northern Nigeria while also supporting clean water sanitation initiatives in Africa in partnership with Face Africa, improving the lives of over 25,000 people in rural Liberia and more. Peters has a keen interest in social and environmental issues in the agricultural sector. He chairs the Joseph Agro Foundation, which seeks to tackle high levels of unemployment and water shortage by creating job opportunities for farmers in Africa.

In recognition of his ground-breaking contribution to development, Peters was one of four recipients of the Marquee Award for Global Business Excellence at the Africa-US Leadership Awards in 2014. In the same year, he won the “Leadership CEO of the Year” award.  In 2015, Peters received the Dr. Martin Luther King Jr. Legacy Award in the “Economic Empowerment” category. He was listed as one of the ’50 Most Influential Nigerians in 2017′ by BusinessDay. Furthermore, he won ‘Oil and Gas Man of the Year’ at the prestigious Guardian Awards in 2018 as well as the prestigious Forbes Magazine Oil & Gas Leader of the year. In January 2019, The Vanguard Media Limited honoured him with the Businessman of the year award at a gala in Lagos.

Distributed by APO Group on behalf of Aiteo Group.

Releaf secures $4.2 million in seed funding and grants to drive industrialisation of food processing in Africa 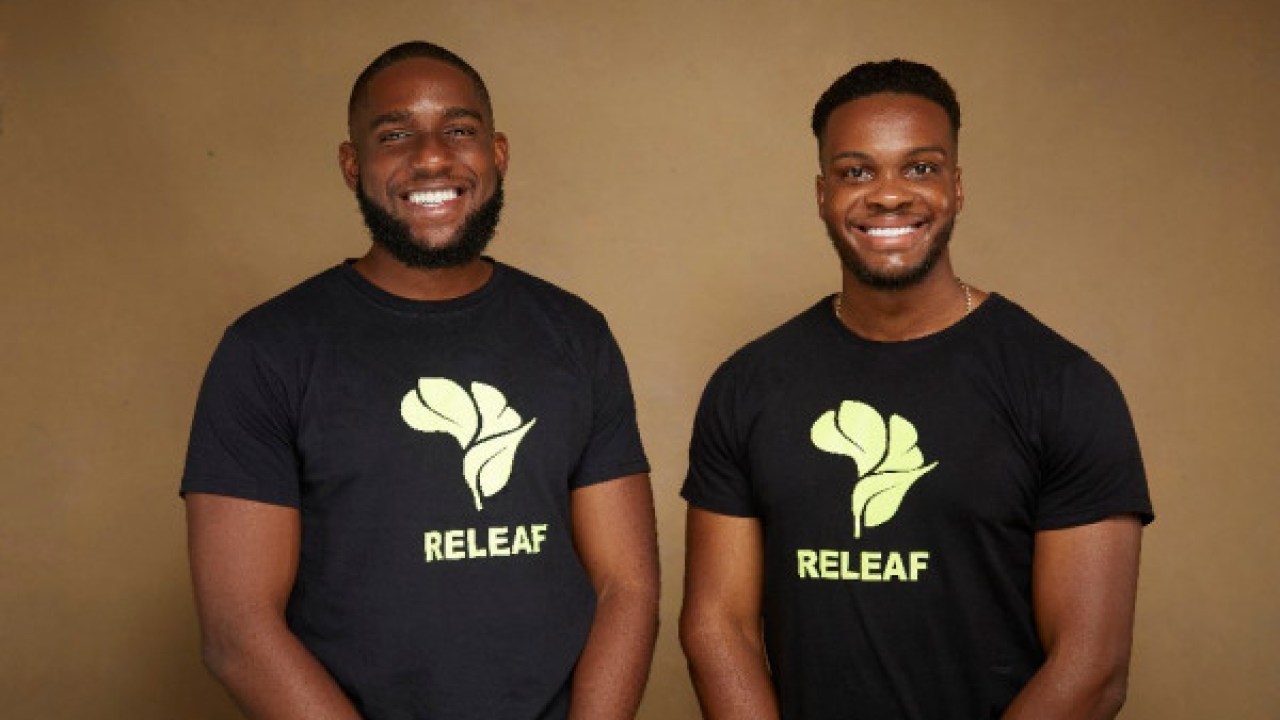 Releaf, an agtech start-up that develops proprietary hardware and software solutions that makes African farmers and food factories more efficient and profitable, has raised $2.7 million seed funding in a round led by Samurai Incubate Africa, Future Africa and Consonance Investment Managers with participation from Stephen Pagliuca, Chairman of Bain Capital and Justin Kan (Twitch). Releaf also secured $1.5 million in grants from The Challenge Fund for Youth Employment (CFYE) and USAID.

The seed funding will enable the development of industrial food processing technology in Nigeria’s smallholder-driven Oil Palm sector while the grant will enable Releaf to provide working capital and other value-added services for smallholders and small-scale processors. Grant funding will support the training, recruitment and retention of more women and youth in Nigeria Oil Palm sector through the creation of both digital and technical jobs.

Nigeria’s oil palm industry is dominated by smallholder farmers, with 80 percent of local market share. However, production rates are low because many still rely on ineffective processes for de-shelling, including the use of rocks and inappropriate hardware. These ineffective processes also lead to low quality palm kernels which are largely unfit as input for high quality vegetable oil manufacturing. As a result, food factories are unable to purchase these raw materials and operate significantly under capacity. On average, food factories have 3X more installed capacity than utilization, which impacts the cost of food and hampers further investment into processing capacity.

Releaf acts as a bridge between smallholder farmers and food manufacturing companies with its proprietary patent-pending machinery, Kraken. Kraken can process any quality of palm nut into premium quality (95 percent purity) inputs for food factories. Releaf’s software connects the start-up to more than 2,000 smallholder farmers, ensuring consistent, large-scale supply. While palm kernel oil production is not foreign to Nigeria, Releaf’s technology and scale means it can process 500 tonnes of palm nuts per week. The software offerings also allow the start-up to receive inbound supply requests from farmers via USSD, provide working capital financing as well as collect proprietary data on supply availability.

Speaking about the new funding, Ikenna Nzewi, CEO and co-founder of Releaf, said, “our mandate is to industrialize Africa’s food processing industry. This round of funding enables us to develop and prove our technology with smallholder farmers in the oil palm sector. Given Nigerians spend ~60 percent of their income on food and Africa’s population is set to increase by 100,000 people per day over the next three decades, we’re presented with an incredible opportunity to feed more people, reduce consumer costs, and supply the fastest-growing food market in the world. Releaf is committed to harnessing technology to accelerate the economic wealth of rural, agrarian societies throughout the Continent. We firmly believe that a robust real economy is the foundation for long-lasting and shared prosperity for Africans and are excited to deepen partnerships with like-minded organizations, governments, and firms.”

This new funding will enable better productivity and accelerate the eradication of the menial and archaic processes that are prevalent across Nigeria’s oil palm sector and the agriculture sector as a whole. It will also enable Releaf to drive more value and profitability across the oil palm value chain, as well as support direct and ancillary job creation in the farming communities of South and Eastern Nigeria.

Rena Yoneyama, Managing Partner at Samurai Incubate Africa who led the round commented, “Releaf’s novel approach to operating within the value chain with proprietary technology set it aside from many agtech startups we have spoken to. We believe the firm’s thesis on decentralizing food processing would have a strong match with Africa’s economic development landscape for the next few decades. Ikenna and Uzo are the perfect founders to disrupt this market in Nigeria and beyond. We are thrilled to back them as they innovate in providing both agro-processing and financial services to rural communities and farmers.”

Iyin Aboyeji, General Partner at Future.Africa noted, “more than 50% of the goods in supermarkets globally contain glycerine – an extract made from palm oil – a cash crop that is passed down from generation to generation. The team at Releaf is building the agro-allied industry of the future from the ground up starting with palm oil which they have developed novel technology to aggregate, deshell and process into critical ingredients like vegetable oil and glycerine. Future Africa is delighted to back Releaf to build the future of modern agriculture”

Dr. Nneka Enwonwu, Country Relationship Manager, from The Challenge Fund for Youth Employment (CFYE) said, “We are thrilled to partner with Releaf on their mission to improve efficiency and profitability for farmers and food factories in Africa. The founders’ vision and the team’s enthusiasm gave us confidence that Releaf will deliver real value for rural communities and create digital/technical jobs for women and youth. We are looking forward to their results and success over the coming years and continuing to support their work.” 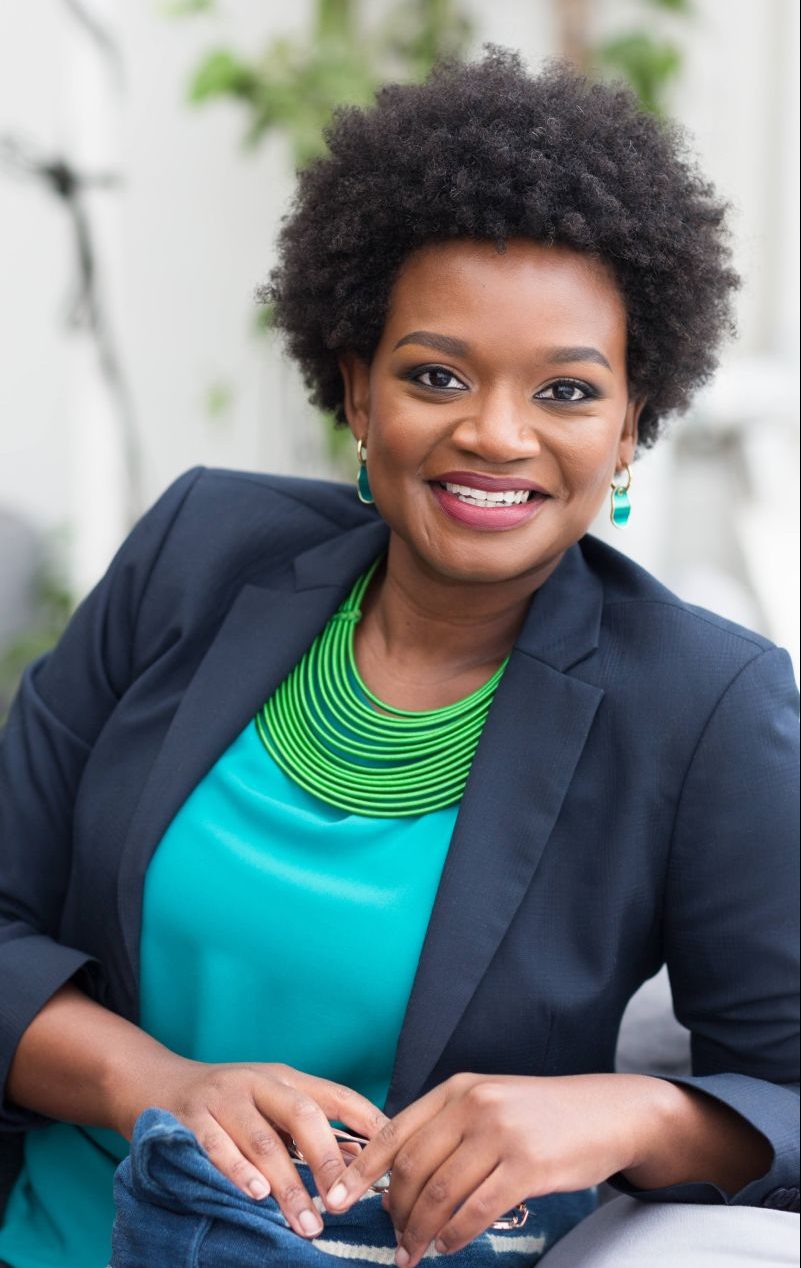 Board of Trustees of the Graça Machel Trust, announces that Ms. Melizsa Mugyenyi has been appointed as the new Chief Executive Officer (CEO) and commences her tenure in this leadership role as of September 6, 2021.

A Ugandan by birth, and residing in Kenya currently, Ms. Mugyenyi brings to the Graça Machel Trust an impressive range of executive management and strategic partnership building skills, as well as extensive experience working in multi-country settings. We look forward to her leadership to expand our Pan African programming, nurture our diverse women’s empowerment Networks, and develop the necessary relationships to fortify our resource base and long-term sustainability.

Ms. Mugyenyi will spearhead the conceptualization and implementation of a bold new Strategic Plan for our institution and take our work of social and economic transformation to greater scale and impact. The Board has every confidence in Ms. Mugyenyi and her ability to effectively steer our organization, in conjunction with our staff and stakeholders, to augment our impact on the African continent and expand our thought leadership globally.

“We are grateful to Dr. Shungu Gwarinda, who steadfastly served as our Interim CEO, driving us forward with a determined focus on advancing the rights of Africa’s women and children, and strengthening our institution and Networks during this interim period.  Dr. Gwarinda will be actively supporting this management transition and will resume concentrating her leadership in her substantive role as Director of Programmes.  We are grateful for her invaluable contributions to further the mission of the Graça Machel Trust”. said Mrs. Graҫa Machel, Founder and Chairperson of the Graҫa Machel Trust

To our valued partners, both current and future, we look forward to positively transforming the lives of Africa’s women and children together with you as we enter this exciting new chapter of our institution’s journey. 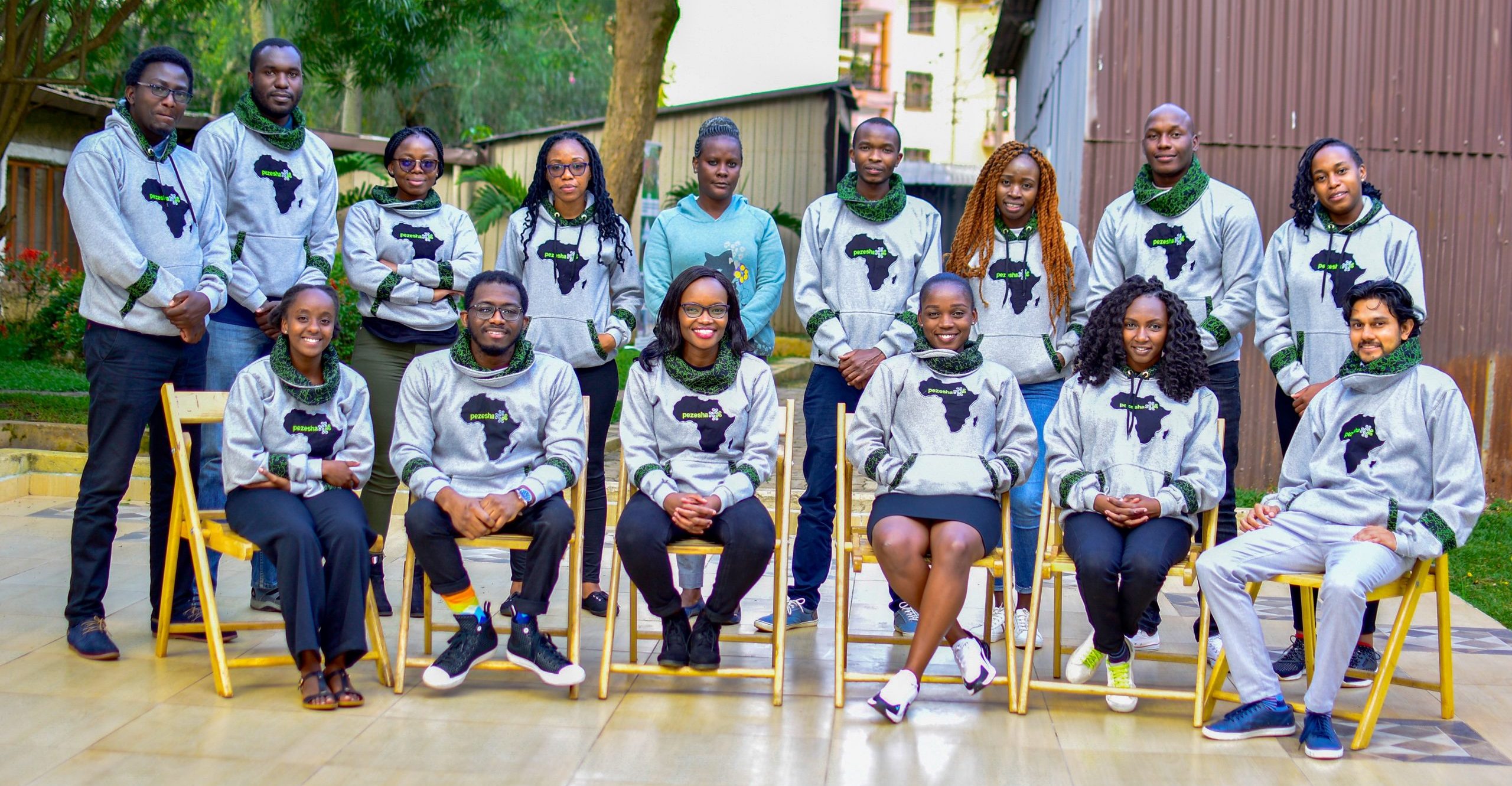 Hilda Moraa, CEO and Founder of Pezesha, commented, “we are delighted to have GreenHouse Capital join the Pezesha family. We are aligned in vision as well as our commitment to solving the working capital challenges that are preventing African SMEs from achieving their full growth potential. GHC’s investment will catapult our growth by enabling us to scale our existing partnerships with the likes of Twiga Foods, Jumia, Marketforce, and Popote Pay, among others. More so, the investment will unlock our vision of building the operating system to power embedded finance in Africa”

Ruby Nimkar, Principal at GreenHouse Capital, added, “Pezesha is breaking down barriers to SME financing by taking an ecosystem approach to the problem of access to capital. Their embedded finance model is truly groundbreaking, and we have full confidence in Hilda and her talented team to take their model into new markets and continuously close the SME financing gap across Africa.”

Bunmi Akinyemiju, CEO of Venture Garden Group, commented, “Pezesha’s innovative model is driving capital to the African SMEs that need it the most. We are excited to be partnering with them to expand their access to funds that they can use for their on-lending liquidity.”

Pezesha has scaled its lending infrastructure in Kenya, Ghana, and Nigeria and is planning to launch in Uganda in September of 2021.