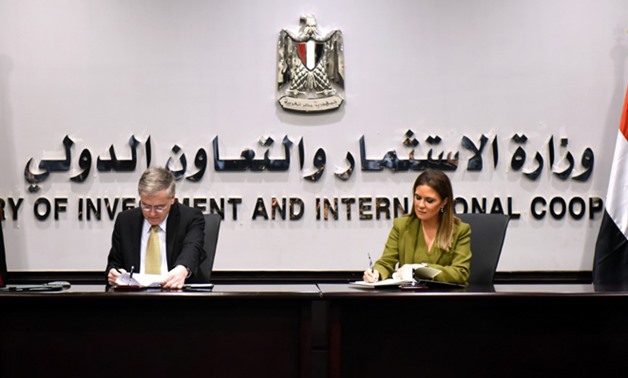 The agreements were signed by Egypt’s Minister of Investment and International Cooperation Sahar Nasr and the German Ambassador to Cairo, Julius Georges Lowe.

Nasr clarified that the first agreement is for technical cooperation through a grant of €48 million in the education sector in support of the initiative of President Abdel Fatah al-Sisi to invest in human resources, in addition to supporting the sectors of infrastructure and environment, agriculture, water and sanitation.

She added that the second agreement is a financial cooperation agreement agreed between the two sides to finance a number of projects worth €102.5 million in the electricity sector, new and renewable energy, energy efficiency and agriculture as well as small and medium enterprises.

The Minister stressed that the priority goes for the neediest areas within the grants to support small and medium enterprises, so as to benefit women and young people, noting that during the negotiations of the agreements, they agreed that the deals to be linked to the training of young people on various skills and benefit from German expertise in the manufacturing sector.

She referred to Egypt’s keenness to intensify and diversify its economic, development and investment cooperation with Germany as part of the implementation of the agreement between Egypt’s president and German Chancellor Angela Merkel during their recent meeting in Berlin.

CAIRO – 28 August 2018: Following June 30 revolution against the Muslim Brotherhood-affiliated former President Mohamed Morsi, Egyptian relations with Germany, along with many other countries, were strained. However, diplomatic, and subsequently economic relations with Germany have been restored in a short time. President Abdel Fatah al-Sisi arrived in Berlin on Sunday, Oct.

Nasr stressed on the importance of increasing German investments under the strategic relations between the two countries, stating that Germany’s investment in Egypt is about $641.4 million, with a number of 1103 companies in the sectors of chemicals, oil, telecommunications, gas, automobile industry, iron and steel.

CAIRO – 31 October 2018: Egypt and Germany signed a number of bilateral agreements on the sidelines of President Abdel Fatah al-Sisi’s four day visit to Berlin, which started on Oct. 28. The two officials signed a protocol of economic cooperation worth €129 million ($146.47 million) during the meeting of Egyptian-German cooperation committee, presidency spokesman Bassam Radi said.

For his part, the German ambassador to Cairo praised the cooperation with Egypt, pointing out that these agreements come in the framework of strengthening relations between the two countries, and indicates the current strategy of cooperation between Egypt and Germany, stressing his country’s keenness to increase its support to Egypt during the next stage on the economic level.

He honored the improvement of the Egyptian economy, stressing that the German Construction Bank and the German Agency for International Cooperation have the ability to provide more expertise and capabilities to serve the economic and development cooperation of the two countries after the establishment of two offices in Cairo.

Minister of Trade and Industry Amr Nassar said that Egypt’s exports to Germany marked an increase of 9.5 percent during the first half of 2018, reaching €717 million, compared to €654.6 million during the same period of 2017.

CAIRO – 20 September 2018: Egypt’s exports to Germany marked an increase of 9.5 percent during the first half of 2018, reaching €717 million, compared to €654.6 million during the same period of 2017, according to Minister of Trade and Industry Amr Nassar.

CAIRO – 21 June 2018: Trade Exchange between Egypt and Germany rose 5 percent in 2017, reaching €5.81 billion, compared to €5.57 billion in 2016, according to Minister of Industry and Foreign Trade Amr Nassar. The minister clarified that the current German investments in Egypt amount to $641 million through 1080 projects in the fields of industry, services, agriculture, construction, communications, information technology and finance.

Fatura secures a $3 Million pre-series A investment round 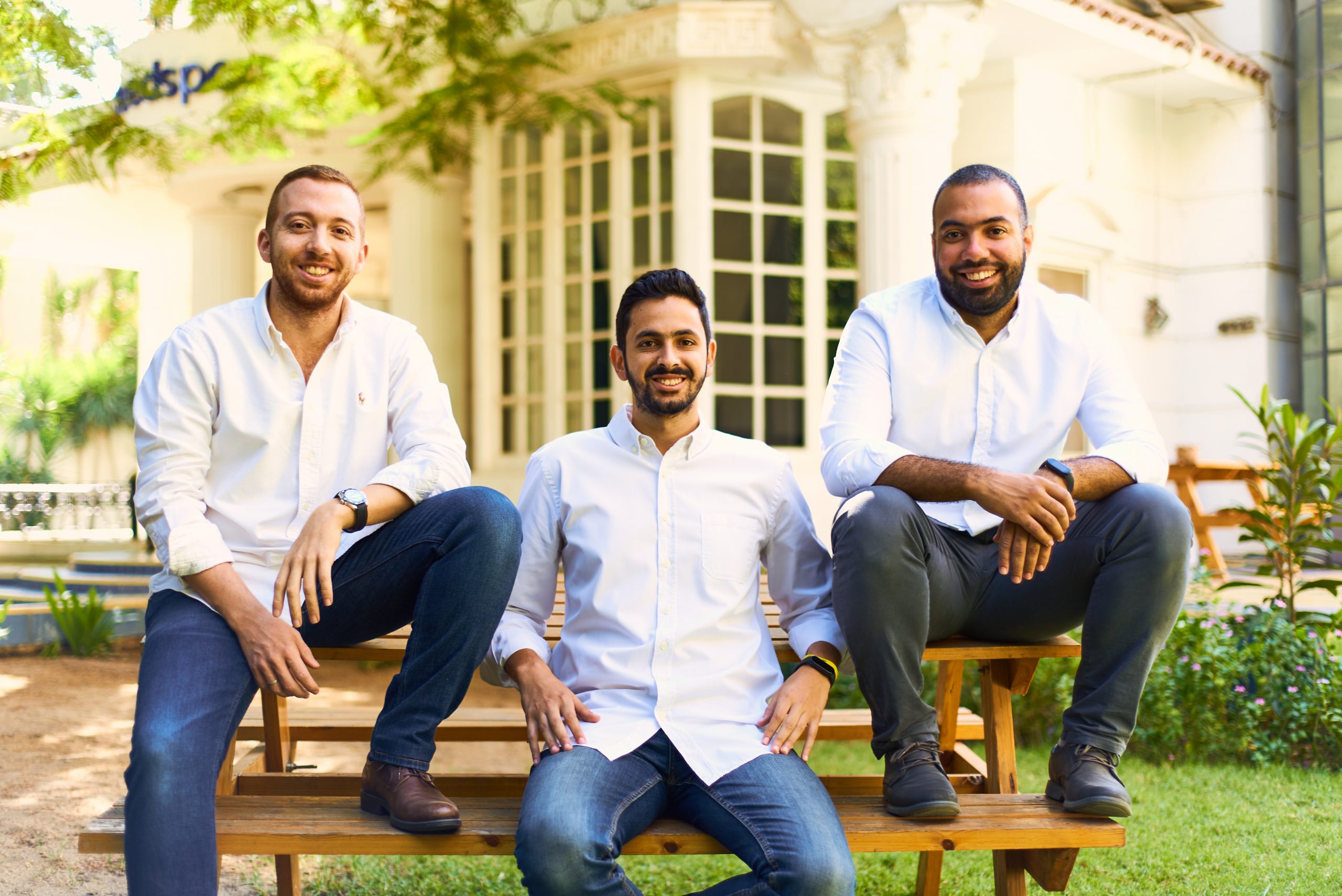 Fatura round was co-led by Sawari Ventures and Arzan VC, with the participation of Egypt Ventures, EFG-EV, The Cairo Angels as well as Khwarizmi Ventures. The B2B marketplace was launched late 2019 and already crossed the 1 Billion EGP yearly GMV milestone, and that’s just in the FMCG sector. Fatura is a mobile application that connects wholesalers & manufacturers with retailers in different industries. The start-up has been operating in the FMCG industry and it is currently piloting in other industries.

During the past year the start-up also extended its reach to more than 25,000 retailers and more than  500 wholesalers and manufacturers across 20 governorates, exchanging more than 10,000 SKUs. Fatura also cracked the surface of financial services by introducing digital lending with focus on retailers financing, aiming to add more services in that area in the near future.

“Fatura’s existing infrastructure has enabled them to expand their offerings to new customers,” commented Hany Al-Sonbaty, Managing Partners at Sawari Ventures, adding that, “the team has demonstrated that they have the vision to identify new opportunities and the prowess and agility to implement and deliver. We are excited to become part of their journey.”

Hossam Ali, Fatura’s CEO, commented on the news saying: “There is a great opportunity in the B2B space in Egypt, that is growing as the players are becoming digitally mature and ready. Collectively, the digital B2B players in the FMCG space capture less than 5% of the market and there is a long way to go. Our conviction is to stay asset-light, be inclusive to all the industry stakeholders and to attract the best on-ground acquisition force across the country”

Fatura has built a strong foundation and infrastructure that enables it to monetize its data and services. The company’s future plans include new services that support the different players in its ecosystem including manufacturers, wholesalers and retailers, multiple digitization initiatives with focus on digital payments and regional expansion into new markets.

“Being part of Fatura’s success story is exciting for us. The FMCG industry is in need of Fatura’s product, which will solve many challenges faced by small retailers. Also, its fintech angle complements the core product and enables retailers to scale their business further with less working capital constraints.” – Hasan J. Zainal, Managing Partner of Arzan Venture Capital

This investment will gear Fatura to extend its services beyond e-commerce and digital lending to optimize the exchange of goods, money and information in the B2B context while focusing on convenience and the different users’ experience.

Business Africa Online, InnoPower and Afrigrants to Host some of the best African, USA Innovators and Investors 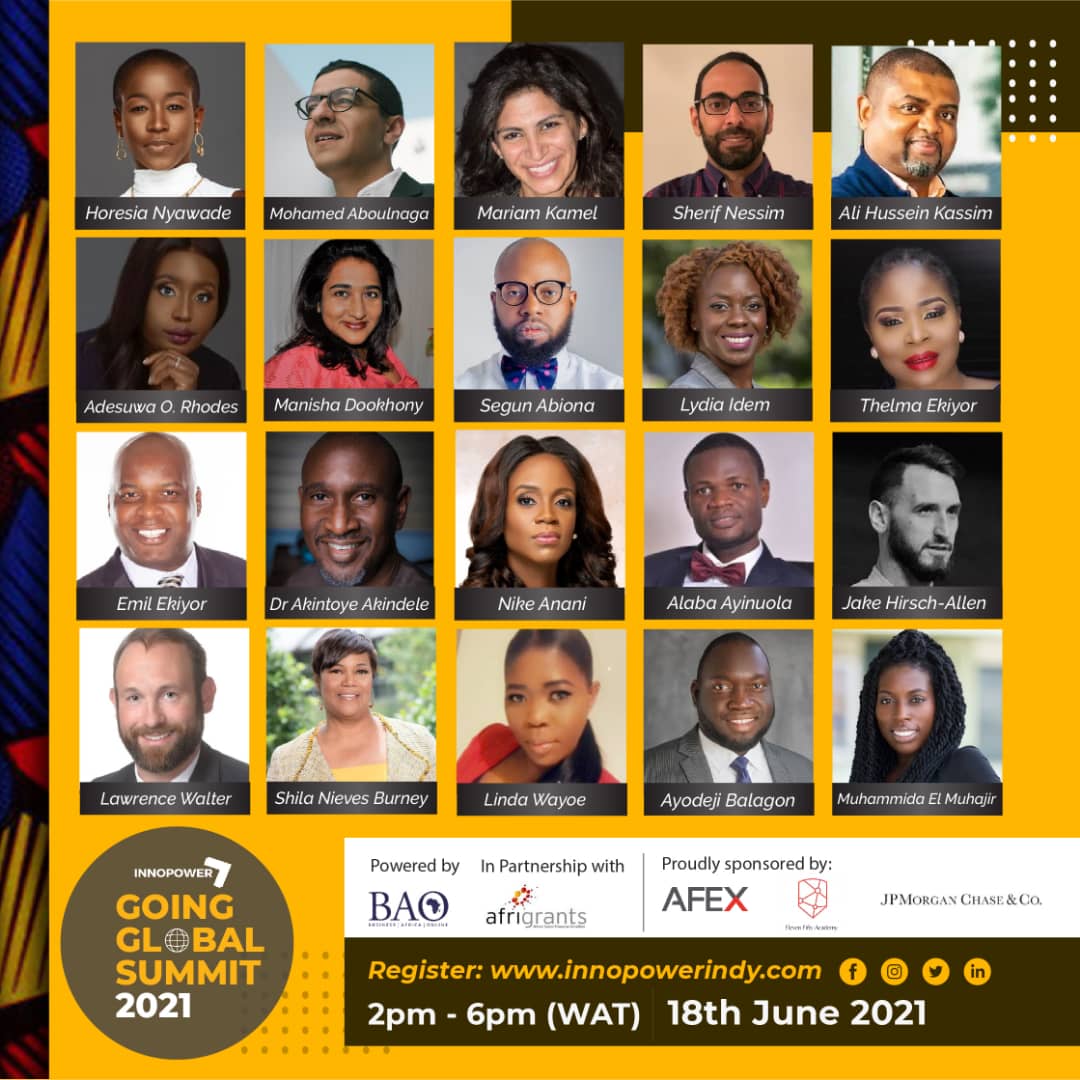 Business Africa Online, InnoPower, LLC (USA) and Afrigrants Foundation are set to Host some of the best Innovators, Investors, Business Consultants and Industry Experts in the world at the Going Global Summit with the theme, “Africa: The Next Global Frontier”. The summit is a part of InnoPower Minority Business Week (IMBW) hosted by Innopower, LLC (USA) scheduled to hold from Monday, June 14 to Friday, June 18, 2021 and currently ongoing.

The Going Global Initiative intends to boost a stronger pipeline of awareness, access to Africa’s talent and solutions with these focus areas; Entrepreneurship, Connection and Advocacy. The InnoPower Going Global Summit 2021 is a digital summit and intends to connect Africa to the global economy, starting with the USA. It will attract global business leaders, entrepreneurs, investors, decision and policy makers around the world, especially from Africa and the United States of America (U.S.A). The Summit will feature panel sessions, virtual pitch, awards and networking.

Conceptualised by Afrigrants Foundation, Pitch School Africa is an annual youth entrepreneurship event  that trains young entrepreneurs on how to pitch their business ideas to potential investors. Over 200 students across Africa participated in the Pitch School Africa 2021 stream, which has now been narrowed down to just 4 BIG ideas that will be featured at the Grand Finale. The 4 Finalists that will pitch their business ideas at the 2021 InnoPower Going Global are; Gualo Confidence (Nigeria) – Gualocian fish processing, Budani Bulayani (Botswana) – Budzi Products, Favour Adeleke (Nigeria) – Qiqi Farms and Oluwatomilola Mustapha (Nigeria) – Raytreat.

The Pitch Jury are;

The winner will be awarded the grand prize of $5000 with a one year mentorship from the finest business developers across the world.

Over the past 12 months, businesses have faced remarkable challenges due to global economic meltdown and the COVID-19 pandemic crisis. Many ventures were forced to shut their doors through legislation and other circumstances. Some managed to survive by thinking out of the box and adapting to the changing and dire times. Business Africa Online (BAO) with the support of InnoPower, LLC (USA) will be recognising and awarding three (3) African resilient startups that have pulled out all the steps to grow back better through the pandemic in Africa. The awardees will get a support grant of $500 each with an acceleration program led by global business developers.

“Our strategic partnership with InnoPower, LLC (USA) is to support and further drive its Going Global Initiatives here in Africa. Also to reaffirm our commitment to connect African entrepreneurs and businesses with US-based investors. We are inspired and motivated everyday by the incredible African (Social) entrepreneurs and investors within our community and their desire to impact the world positively.” says Alaba Ayinuola, Founder & CEO of Business Africa Online

To register for this virtual summit, please visit bit.ly/InnoPowerGoingGlobal2021 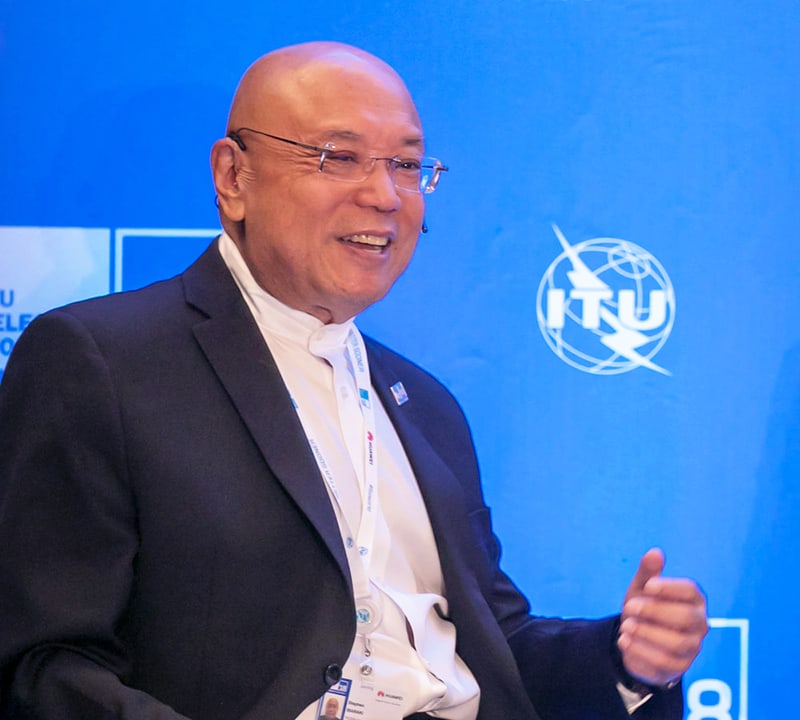 Ibaraki is the first VIP keynote speaker to be confirmed for AI Expo Africa 2021 ONLINE. In his keynote address, entitled, “5th Machine Age Driving Digital Reshaping” he intends to explore the “Society 5.0” and “Smart Humanity”.

Ibaraki who is a 16 time recipient of the Microsoft Most Valuable Professional (MVP) award, most recently in the Artificial Intelligence (AI) category, is also the chairman and managing general partner of REDDS Capital. In addition to more than 300 awards and recognitions as well as over 300 global engagements impacting over $100-trillion in sustainable investments, Ibaraki is also a contributor for IT World Canada and Forbes on issues around AI.

Ibaraki’s keynote abstract states, “In popular stories about Chaos Theory, the wing beats of a butterfly in Geneva, are connected to the violent storms in your hometown in Africa. Global ecosystems, all interconnected thus force multiplied and amplified, are at an historical inflection point. These are founded on technology acceleration, with more disruption in 5 years, than the last 10,000 years. This Digital Reshaping will forever change governments, industry, academia, education, investments, startups, media, society, culture, our lives and our children’s future. What will the world look like, advanced by Smart Humanity, Society 5.0, 5th Machine Age, AI and innovation trends addressing global challenges and opportunities? What are the exponential change making innovations you must track, implement, and resources you must use to ensure success and not failure during these chaotic next five years?

Now entering it’s fourth successful year, AI Expo Africa is Africa’s largest B2B / B2G AI, RPA and 4IR smart tech trade event and conference, with the 2021 edition building to be the biggest yet with over 5000 delegates registering interest and expected to join the three-day online event.

Dr Nick Bradshaw, founder of AI Expo Africa and CEO of AI Media Group commented, “It’s a real honour to welcome Stephen as one of our VIP keynote speakers.  We have been working with the ITU, Geneva since 2019 around partnering with the global AI4Good movement and the Africa region and this is another great commitment towards growing collaborations around AI4Good in our region. This announcement follows the recent conclusion of the first African focused ITU AI4Good Innovation Factory Challenge that received 44 applications from 12 African countries & 5 finalists using AI-powered innovation for diverse sectors in Africa covering Fintech, Agritech, Cleantech, and Insurtech.”