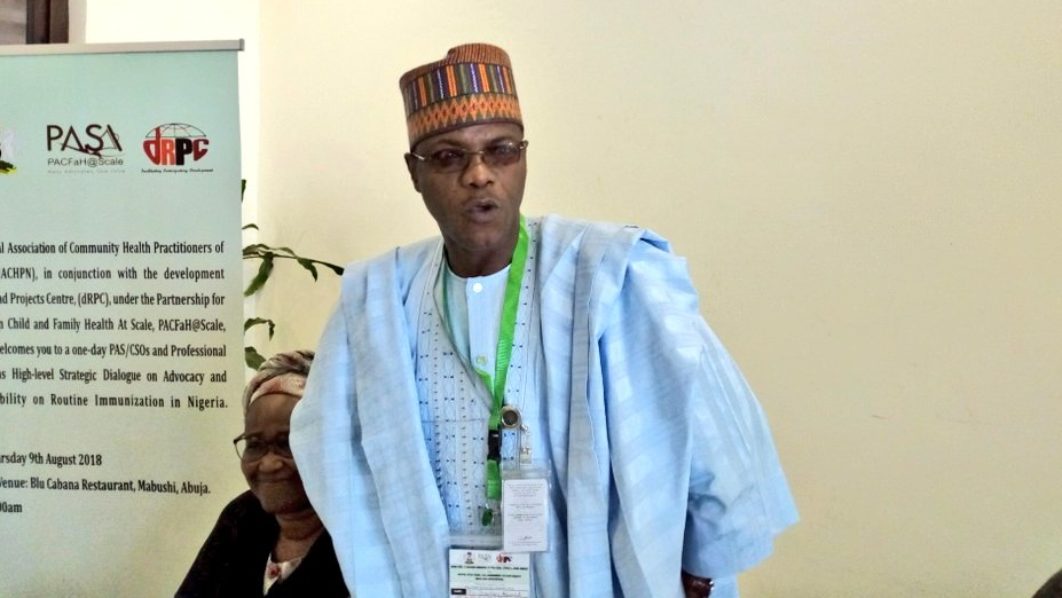 The Executive Secretary of the NPHCDA, Faisal Shuaib, who spoke at a one-day high-level strategic dialogue on advocacy and accountability on routine immunization in Nigeria, said there are over four million unimmunised children in the country.

The dialogue was organised by the development Research and Projects Center (dRPC) in conjunction with the National Association of Community Health Practitioners of Nigeria (NACHPN).

The aim of the dialogue is to strengthen the accountability framework for routine immunisation service delivery at national and state levels.

The meeting is part of the continuous efforts towards attaining the objectives of Nigeria’s Strategy for Immunization and Primary Healthcare system strengthening, (NSIPSS) 2018-2028.

Delivering a keynote address on behalf of his boss, Bulama said the NPHCDA is doing everything to change the notion of Nigeria having the largest number of unimmunized children in the world.

He said part of the effort the agency has been taking in improving routine immunisation (RI) is that every department in NPHCDA conducts weekly meetings.

He revealed that the NPHCDA is working on how Nigeria can start local vaccine production.

“We are looking at how we can be on our own feet. This we are doing by seeing how we can start local vaccine production. But with vaccine creation, the resources is limited. This is why GAVI has extended the date for vaccine funding in the country.

“GAVI has some concerns that are why they are giving us additional support at this time till the next ten years, hopefully, our economy and resources might have improved,” he said.

On his part, Emmanuel Abanida, senior technical advisor at the dRPC, during his presentation, acknowledged the importance of accountability in the federal and state level saying it would ensure that RI goes a long way to reaching all Nigerians.

“In 2011, the GAVI board approved that Nigeria and India should have a special package for immunization because they are two large countries. We call it the strategy for large countries. However, the performance of Routine Immunization in Nigeria has become a huge challenge because coverage is very low, funding is very low,” he lamented.

My-medicines.com – solving the problem of sustainable access to genuine medicines 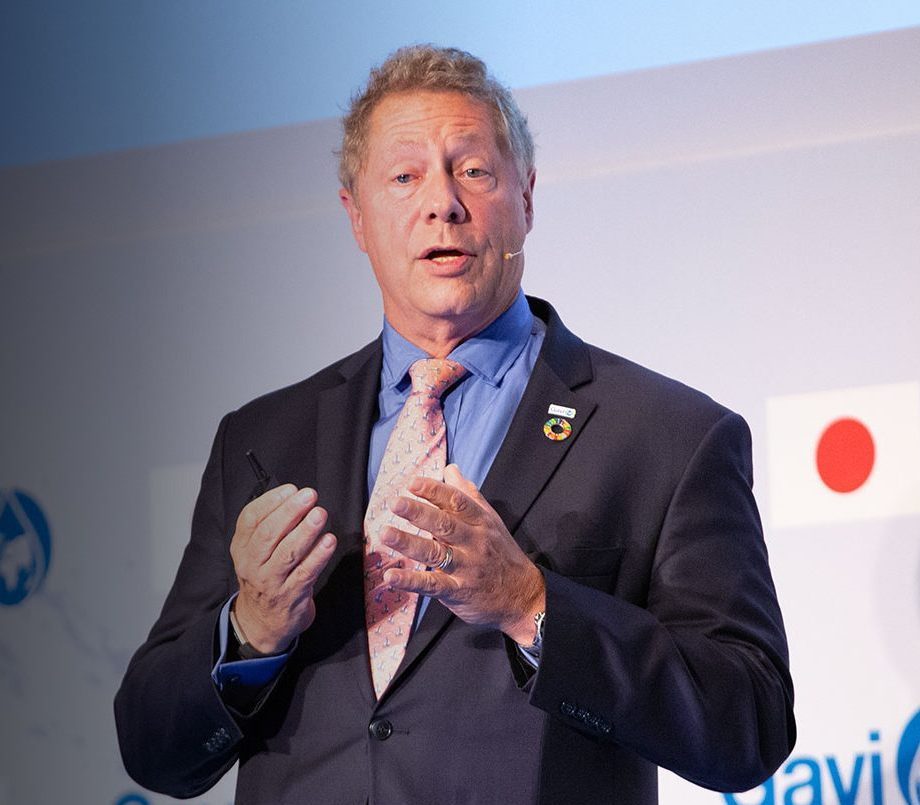 Today, COVAX has surpassed the milestone of 1.5 billion COVID-19 vaccines delivered around the world, following a shipment of 2.26 million doses of the Johnson & Johnson vaccine to Tanzania. A little over 15 months since its first international delivery to Ghana, COVAX has now shipped COVID-19 vaccines to 145 countries across the world.

Nearly 90% of these have been fully funded doses delivered to lower-income countries supported by the Gavi COVAX Advance Market Commitment (AMC). COVAX is the major supplier of COVID-19 vaccines in low-income countries and humanitarian settings. As the largest and most complex global vaccination effort in history, COVAX’s work has helped raise the proportion of people in 92 lower-income countries protected by a full course of vaccines to 46% on average.

Dr. Seth Berkley, CEO of Gavi, the Vaccine Alliance, which manages the COVAX Facility and the Gavi COVAX Advance Market Commitment (AMC), and leads on procurement and delivery at scale for COVAX, comments on this milestone: “This is a significant milestone for COVAX, set up as an unprecedented global collaboration during the worst public health emergency in a hundred years, but more importantly, we are proud to have contributed to the incredible achievements of lower-income countries, who have administered nearly 4 billion doses of COVID-19 vaccines in a truly historic global rollout.

Tanzania is a fitting example of the hurdles that have been overcome and the challenges that remain: the pandemic is not over, and we must remain committed at all levels to pushing coverage rates higher, focusing on ensuring those at high risk are fully protected. With plentiful global supply now available to support this effort, the next 3-4 months are crucial. We call on countries to set ambitious targets backed by concrete plans for implementation and on all partners to provide countries with the resources needed to accelerate and expand national strategies.

COVAX remains committed to working with partners to ensure lower-income countries can access both vaccines and the support needed to turn these vaccines into vaccinations.” 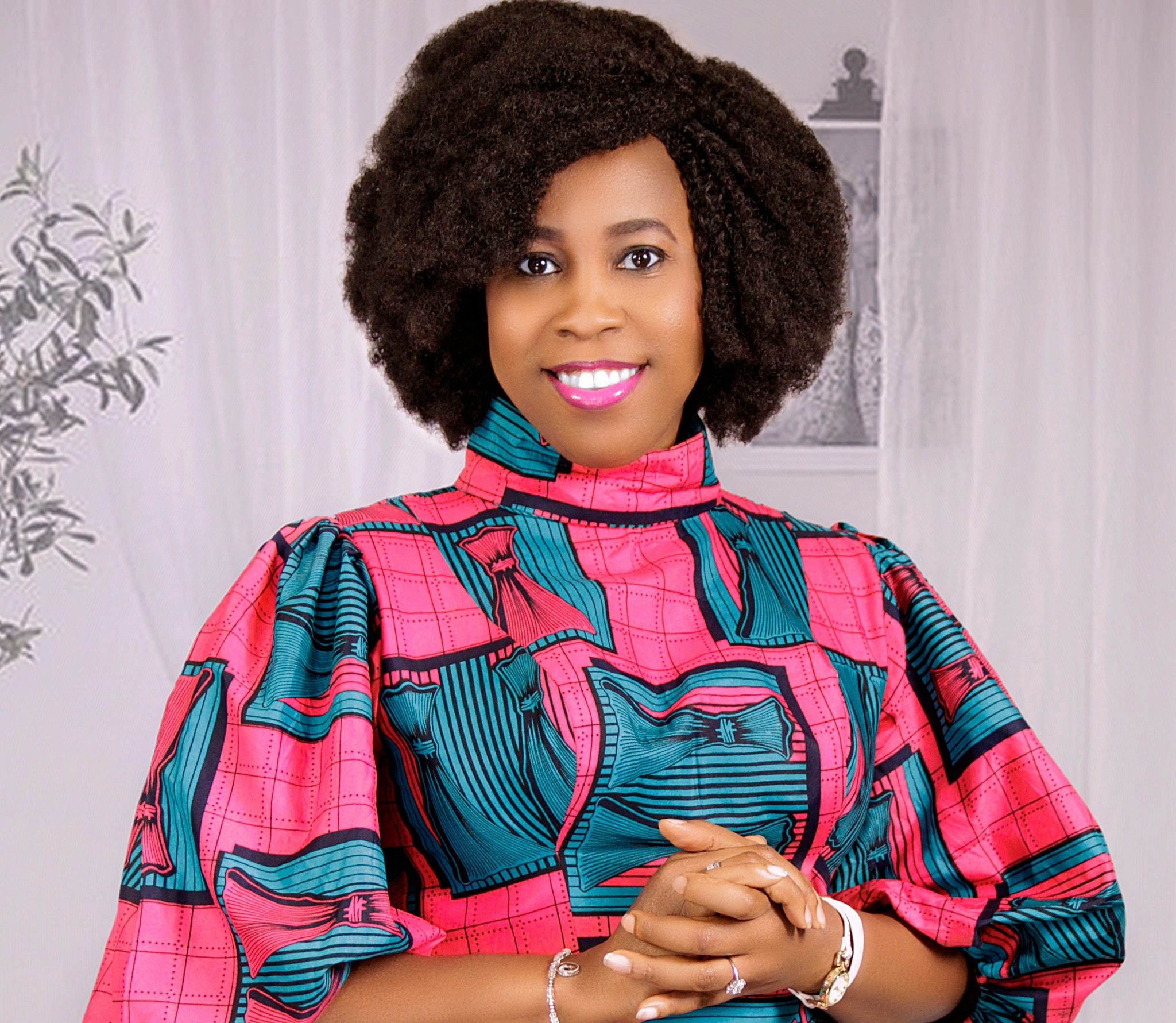 As a Nigerian living in the diaspora, I have observed some character or culture flaws most Nigerians always exhibit different from the culture of their environment or community.

In the UK, employed workers always look forward to going on holiday, weekend break or some sort of fanfare. Nigerians are always known to work for 52 weeks in a year with little or no planned holiday.

Most of us use our annual leave allowance to attend burials, traditional marriage, parties also known as ‘owambe’, and travel home for Christmas and Easter holidays. We all know that anytime we travel back to Nigeria for any ceremony, we are not actually having a proper holiday. Holiday is different from visiting family and friends.

Out of about six weeks annual leave, bringing out at least a week for a planned holiday which would entail 100% relaxation and fun is not asking for too much. I’m not saying people should not visit their loved ones back home, but we have to know the difference. Holiday is necessary to refresh one self and renew energy so that we can destress and improve our mental health and overall wellbeing

The WHO has advised that working over 55 hours a week can reduce one’s life span. According to WHO, long working hours are killing hundreds of thousands of people a year, according to the World Health Organization (WHO). The research found that working 55 hours or more a week was associated with a 35% higher risk of stroke and a 17% higher risk of dying from heart disease, compared with a working week of 35 to 40 hours. The study, conducted with the International Labour Organization (ILO), also showed almost three quarters of those that died as a result of working long hours were middle-aged or older men. Often, the deaths occurred much later in life, sometimes decades later, than the long hours were worked.

So why do Nigerians living in the diaspora like working till they drop…well the reason is an offshoot of a typical Nigerian problem caused by economic hardship. People see working as a means of escaping poverty back home so when they find themselves abroad, they forget they are mere human beings who can break down. Part of healthy living entails bringing out time for relaxation. Travelling home for Christmas, Easter or attending one ceremony or the other is not relaxation. Once every year, stop working, go somewhere quiet…. Rest, sleep, explore and just do nothing.

Nigerians in the diaspora work so hard year in year out only to die of stress related illness afterwards. When you are sick. Your employer would replace you within days…

There is a place for play, your annual leave is for rest and holiday. Please create at least 10 days out of your annual leave entitlement for a planned gateway holiday. You don’t have to travel very far; it could just be a staycation in another city.

Like they say in Nigeria, problem no de finish, please look after yourself. 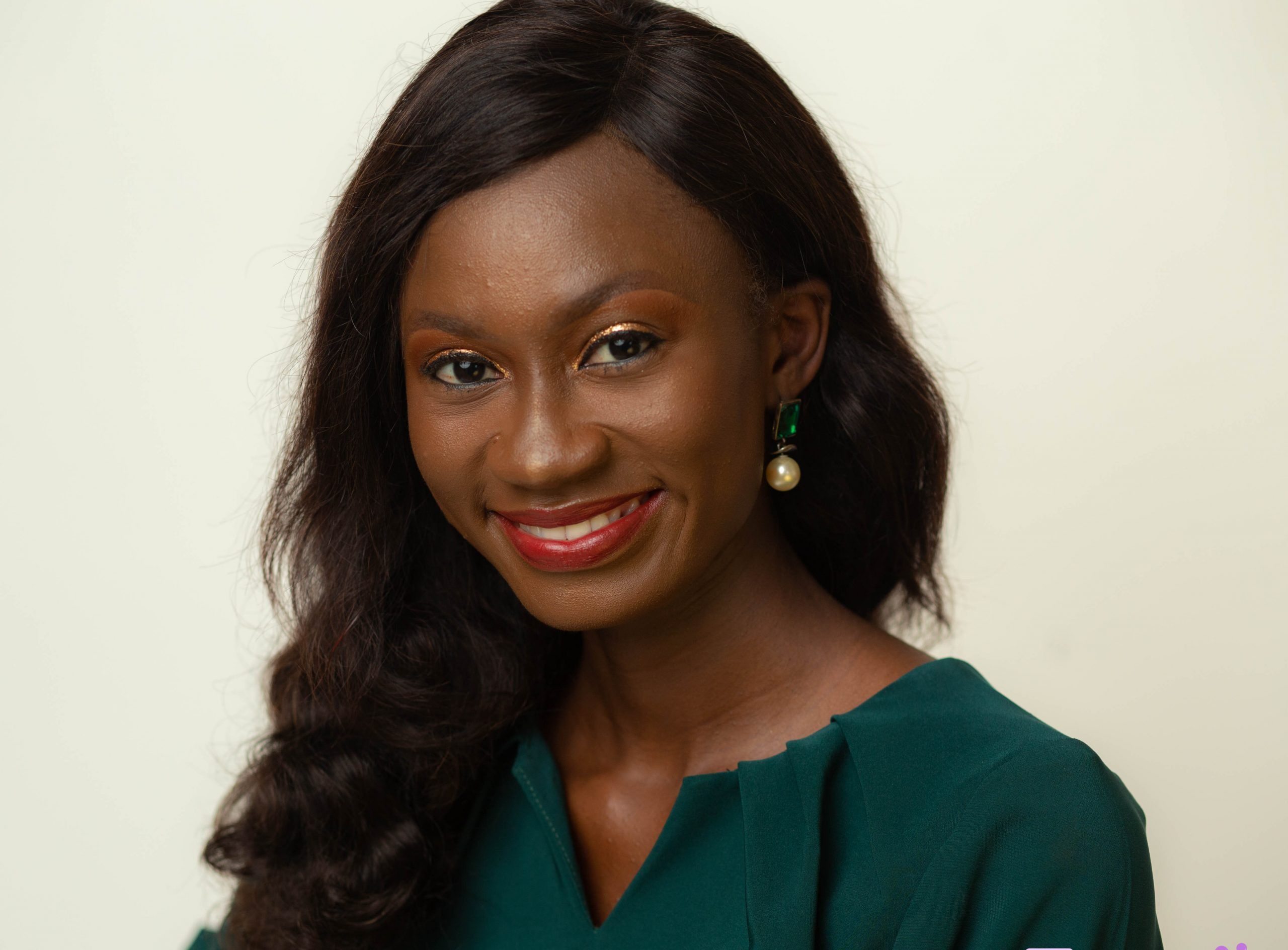 To understand how revenue leakage can play out, the case of Mr. Tanso Justice, a 45year old architect would be considered. (The names or conditions inserted have no bearing to a real person and is solely being used for the purpose of learning).

Mr. Tanso Justice is married to a banker who has insurance covering for their family with JayPMog HMO. He developed abdominal pain which he initially ignored but the situation worsened and became associated with reduced appetite. Realizing his need to see the Doctor., he goes to their provider hospital (Leyden hospital) to get checked.

On arrival, his details are captured, vitals checked and then proceeds to see the Doctor. In the consulting room, the Doctor asks Mr. Tanso asks some questions, examines him and prescribes analgesics and supplements alongside dietary advice. He requested that he get a blood test done and abdominal imaging. Although, at this stage, there is no clear diagnosis yet. The Doctor, in his bid to clear the patients at the waiting area, decided to fill in details of visit at the end of all the consultations.

However, after seeing Mr. Tanso, he realized he was fatigued and decided to go on a break after which he would return to fill in details of the consultations. On returning from his break, he missed certain details on the services he had rendered. He decided to leave out information he was not sure of and deduced the diagnosis for some cases from the prescriptions he sent to the pharmacy.

Having carried out requested investigations, Mr. Tanso picked his medication and returned the following week with his results to see the Doctor. However, this time, the attendant at the front desk captured his name as Mr. Tanko Justice. The Doctor referred him to a specialist as he had an intestinal growth. During this consultation, all details are inputted immediately and a working diagnosis. Only that this time it is under the name ‘Mr. Tanko Justice’ as sent by the front desk.

All this while, Mr. Tanso had made no payment out of pocket and as far as he was concerned, JayPMog HMO was doing a great job. His appointment to the specialist involved further questioning and examination although he could not view his last hospital visit as there was only one documented visit to his name – his first visit. The Consultant requests he get tested for certain tumor markers just to be sure. Mr. Tanso is booked for the above-mentioned test but a call could not be put through to the HMO at that time to confirm if the test was covered. The front desk attendant eventually assumed that this was also covered. A patient had presented with a similar condition from the same HMO and got approval. What she forgot was there are different plans and coverage with HMO.

He gets his test done, returns to the consultant who states there is no problem and gives him a long appointment. All this took place within the space of 3 weeks and the hospital raised claims which received few denials especially the test for the tumor markers. Mr. Tanso is called to pay for the investigation done but insists his HMO should cover that ‘little’ blood test he did in his words. The continuous back and forth on the phone only resulted in a lengthy conversation with no payment.

From the case study presented above, leakage points can already be identified. And no matter how small they seem, they usually result to a large sum being lost over time. Modern healthcare conducted a research across hospitals in Florida and discovered 9% of claims raised are denied resulting in an annual revenue loss of $262 billion. Recent research even shows denial rates have risen to about 11.1% which will continue to be on the rise if not curbed.

The image below by Effy healthcare highlights possible causes of revenue leakages and can also be used to relate with Mr. Tanso’s case.

It is therefore highly imperative that healthcare organizations stay in the black and remain financially healthy. One of the ways of doing this is managing leakage. Failure to do so often results in huge and expensive losses. Some facilities even fold up when they can no longer be sustained. To address the issue of revenue leakage, the first step is to identify and quantify how much revenue is being lost. It would suffice to further identify areas operating effectively and those that need to be worked on.

General improvement measures that can be taken include:

Revenue leakage can be managed. It may be cumbersome attempting to solve all at once. But there are improvements that can be made from time to time in addressing the issues whether simple or complex. Healthcare is dynamic and as such requires the willingness to be dynamic in addressing the challenges.