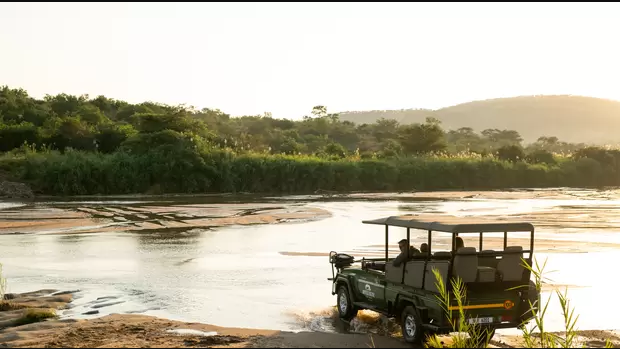 Game drives are unique, as travellers get a history lesson about the Zulu Kingdom. Picture: uMfolozi Big Five Game Reserve.

I am seated in a green game vehicle, soaking up the view of the rugged wilderness before me. For someone who has been on more than a dozen safari trips throughout South Africa, you’d think I would tire of seeing the “Big Five” and natures other charming creatures. But my trip to uMfolozi Big Five Game Reserve, on the other hand, was different.

Having spotted the endangered white rhino, a cheeky elephant answering the call of nature and dozens of impala, it was the area’s rich history that piqued my curiosity.

Our game ranger Artist Gqwetha, who has accumulated a wealth of knowledge in his 10 years on the job, brings the vehicle to a halt and turns to our group of intrepid explorers.

He points to the valleys King Shaka once called his home and where he encountered many battles. Shaka was at the forefront of conservation and played a critical role in how man interacts with the wild today.

Game drives at uMfolozi merge culture and wildlife seamlessly, painting a perfect picture of conservation and the strides locals have made to protect the area.

Barry and Sonja Theunissen are the brains behind the uMfolozi Big Five Game Reserve concept, which falls under the Mantis Collection portfolio. In less than eight months, they have launched two new lodges, Mthembu and Biyela. Zulu, a luxury tented camp, opens next July. The lodges, named after the five descendants of King Shaka’s chiefs, who offered their tribal land to enhance conservation in the uMfolozi Wilderness, prides itself on community development.

“It benefits everyone, especially community members who are hired to work at the 5-star lodges,” chief Mthembu tells our group later that afternoon, during a mandatory sundowner break overlooking the grand White iMfolozi river.

“It is the start of something extraordinary,” he says, raising a triumphant toast to our group of seven.

As we arrive at Mthembu Lodge, the staff gather around – serenading us with songs that pay homage to Africa. They are in a joyous mood and prepare to treat us to an authentic African bush experience. Walking into the lodge feels surreal. The modern furnishings, coupled with fresh plants, transforms it into a paradise for any traveller. A refreshing drink in hand, we get a tour from managers Dave and Christina.

Mthembu Lodge, which opened in October, has seven private villas and two family villas. The villas mirror the original Zulu dwellings. Each villa is named after a Zulu King who played a pivotal role in the province’s history. Hand-built by members of the Mthembu tribe, the villas are tastefully decorated with African art and contemporary furniture.

I was booked into the King Solomon villa, which has mesmerising views of the wilderness. The villa comes standard with an oval-shaped bath, outside shower, air conditioning, stocked mini bar, wi-fi and a private deck perfect for when you want to escape for a few hours, with a good book and a G&T.
For those who prefer to explore, the lodge’s infinity pool is ideal for a mid-morning swim. Mthembu offers special boma dinners on request, with energising performances from the youngsters of the tribe.

I couldn’t help feasting on the grilled prawns and spicy chakalaka, while others tucked into the braaied meat. The next day, we drove for an hour to Biyela Lodge. Biyela Lodge, which opened in May, caters for the modern safari traveller. Tiered on a descending cliff, overlooking an oxbow lagoon in the White iMfolozi River, Biyela is the perfect escape for travellers wanting to get away from the hustle and bustle of city life.

Boasting 12 villas, the lodge offers guests spa treatments, stargazing, and will soon launch walking safaris. Travellers have the option of booking into the honeymoon suites, with broad views of the park and wilderness areas, or the river frontage that offers astonishing views of wildlife. Guests can choose to skip game drives as you can view the game from the comfort of your deck chair. And the elephants and various species of antelope frequently pop by to quench their thirst.

All villas come standard with outdoor showers, a lounge and spacious bathrooms, and a viewing deck. Three of them are without a pool. However, it has night beds for those who want to sleep under the stars. The lodge’s infinity pool, with 180-degree views of the plains, is Biyela’s most attractive attribute.

Breakfasts – an elaborate affair – offers everything from fresh fruit, cheeses and baked goodies, followed by a hot breakfast of your choice.
Drinks and snacks flow freely throughout the day to keep your stomach satisfied until the afternoon’s high tea spread. Dinner at Biyela allows travellers to dress up and tuck into a mouthwatering fine dining meal – fit for a chief. We ended the night making S’Mores by the fire pit.

Angola Bets On Avitourism To Attract Tourists And Revenue 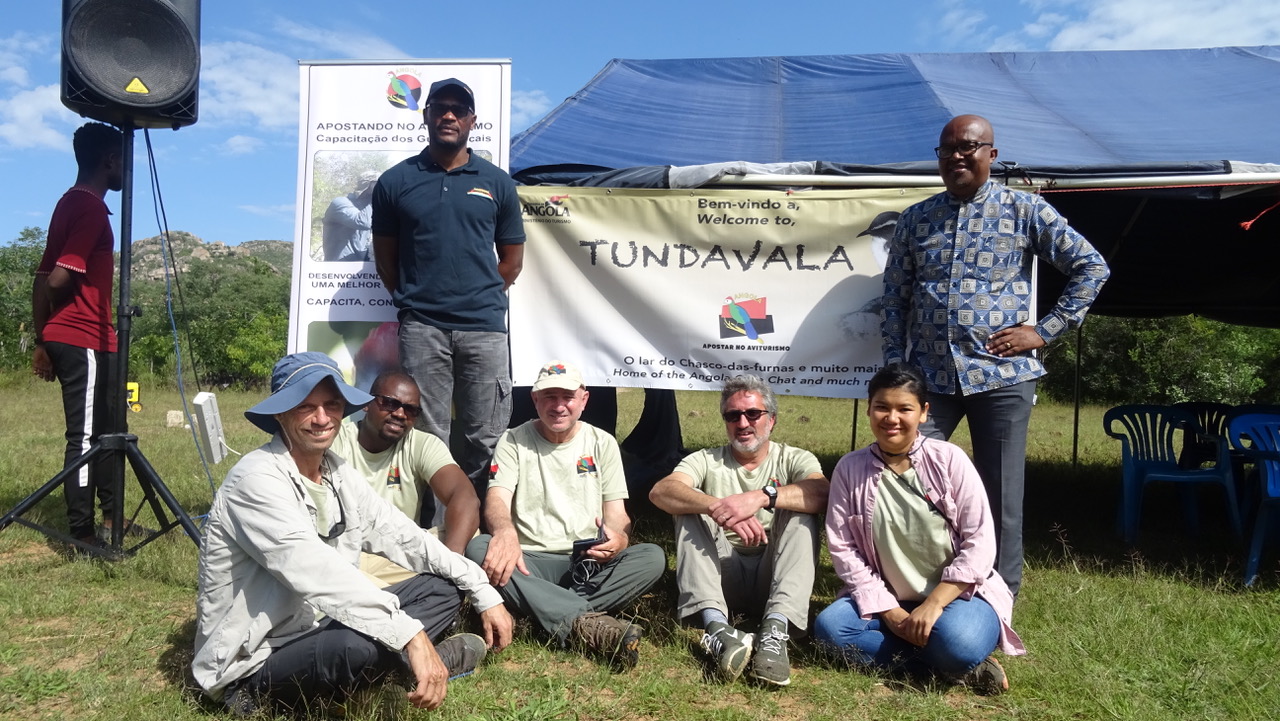 The Ministry of Tourism of Angola, in line with guidelines from the WTO (World Tourism Organization), has as a goal for the year 2020 – 2021 a bet on Rural Tourism, involving this and other projects for the development and fight against poverty.

Within the scope of the project “Betting on Aviturismo”  the Ministry of Tourism of Angola, in partnership with a company PROMISED LAND VENTURES (PLV), launched this Monday, in Tundavala, Huíla province, training group in Tourist Guides.

The location of Tundavala was chosen because it is a tourist spot of great potential, not only that it exhibits bird watching, but also that it refers to the majestic landscape that attracts and surrounds visitors with its strong exuberance.

The expectation of Angola Tourism is that, with no final training action, the trainees are qualified and equipped with technical skills on hospitality, reception, interaction and orientation of tourists, as well as addressing ecological issues and ecosystem conservation.

It is a project composed of several stages and the formation of local guides along the tourist route, used by the Ministry, using one of the key stages for the success of the project, preparing the guides for those who are able to guide interested tourists, national or foreign.By the time of the “Betting on Aviturism” project, there are already a total of 15 young people, in the provinces of Malanje and Bengo, deep on the communities, places where there is a record of the presence of endemic birds with great potential as rare birds.

Addis Ababa has the most expensive hotel rooms in Africa, survey reveals 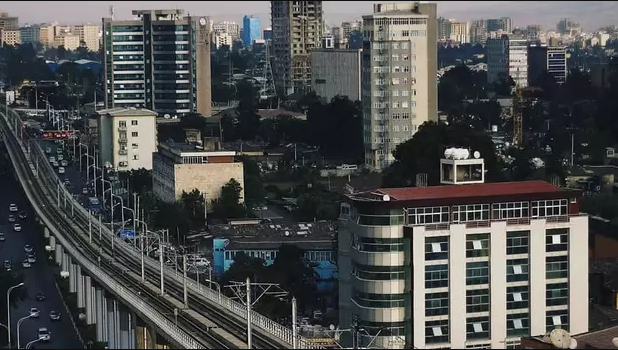 Addis Ababa has the most expensive hotel rooms in Africa. Picture: Instagram @everyday_ethiopia_

Addis Ababa, Ethiopia, posted Africa’s highest average daily rate (ADR), according to the most recent 12-month data from STR when surveying hotels on the continent.

From July 2018 through June 2019 the city registered an absolute average daily rate (ADR) of US $163.79 (about R2 400) when measured in constant currency, which removes the effects of inflation.

“The city has multiple demand drivers, such as a growing economy, successful airline and its status as the diplomatic capital for Africa. Air connections and ease of access compared with other cities also factor in the equation for strong demand, which provides hoteliers with the confidence to maintain rate levels.”

“With healthy performance comes interest in investment. The market’s pipeline is strong with 22 hotels and 4 820 rooms in active development. We will continue to monitor these new openings to see how the market reacts once these additional rooms open,” he says. 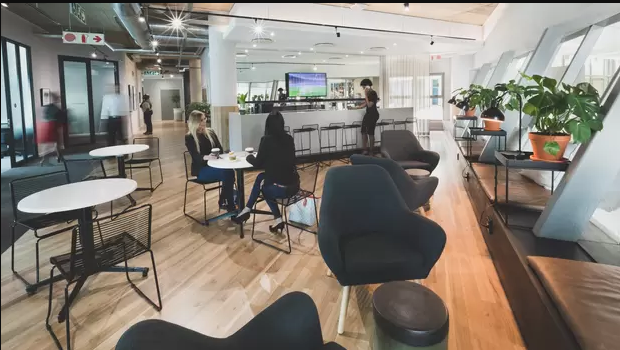 The Business Exchange is a popular co-working space with offices in Johannesburg. The company has also just opened an office in Mauritius. Picture: Supplied/IOL.

If you find yourself travelling for business, here are 5 tips to help you:

Make sure your accommodation has free and fast wi-fi

Most hotels have decent wi-fi, and in many cases it’s free. There are, however, some hotels that cap the wi-fi usage to a certain amount for guests, after which you will be made to pay for further access.

The last thing you want is to be in your hotel room or the business centre on a Skype call with your boss, and you reach the wi-fi limit.  If you are staying in an Airbnb, or something similar, talk to your host ahead of time to ensure you have internet connectivity.

Rent a hot desk in a co-working space

It is not always easy getting work done at your accommodation or a coffee shop. A hot desk at a co-working space can be rented on a day-to-day basis and makes for an ideal, functional, work base. There is free wi-fi, and the facilities are ideal for business travellers, with boardrooms, meeting rooms and more. For those travelling in and around South Africa, there are many different options available.

The Business Exchange is a popular co-working space with offices in Johannesburg. The company has also just opened an office in Mauritius.

Book an extra day to explore

If you can afford it, definitely try to add an extra day of leisure to your business trip. This will allow you to take in the city at your own pace and time. You can also get to know the people a bit better, learn about their culture, and eat some local delicacies.

Try some local experiences and deep dive into what the place has to offer. It makes for a better story than telling people you just zipped in-and-out quickly, with no idea of what goes on in the city.

Buy a local sim card rather than switch to roaming

Switching to your network’s roaming offering, while convenient, will steadily, and steeply, push up your monthly bill. Rather buy a local sim card and use that instead. It is a much cheaper option.