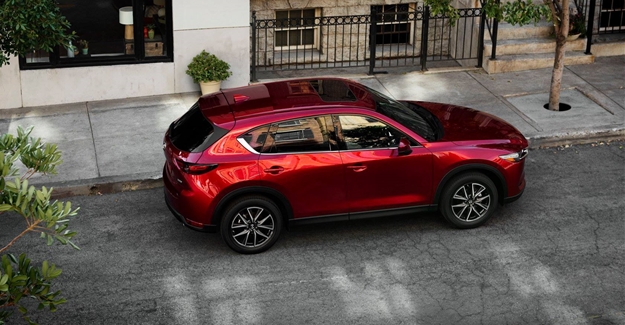 The Mazda CX5 was first launched in SA in 2012 and in 2015 we were introduced to the facelift editions, both in petrol and diesel. I was lucky to test drive this cross-over CX5, 2litre Petrol derivative Active Auto model for two weeks, kind courtesy of Sean Scully, dealer principal at Fury Mazda.

From the outset, this SUV certainly has improved functionality, advanced technology and remodelled interior and exterior designs.

Revitalised to keep it relevant to the SA market, the CX5 boasts a new front grill that lends to the overall aesthetic and appeal of the vehicle.

The new feature of the electronic parking brake that replaces the conventional handbrake, is a new and welcome feature. What a pleasure to click a button instead of tugging at a handbrake stem.

Satellite navigation can be added but is standard in the Individual and Akera models and optional in Active and Dynamic models.

One of the standard features in this model is the reverse camera, which gets another huge thumbs up. Park distance control is good but the camera is even better – although it does take some time getting used to as most drivers actually look back when reversing.

The i-Stop feature is designed to save you petrol and switches of when you are at a traffic light, but how much petrol can you really save? Surely the continual stop-starts adds more pressure on the starter motor. Scully advises that so far, there has not been any complaints in this regard.

This is a keyless vehicle with push-button engine start as well as the hill climb assist stop-start ignition.

This model is not equipped with daytime driving lights which, considering the price, I felt should have been included. Another feature not standard (and one that we take for granted) is the locking of all doors once you drive off. I enquired about this and was told that this is an after-market addition that comes at a cost of approximately R1775. I however still feel this should have been a standard feature.

The indicator click sounds are not loud enough and often dulled out if you have the radio on which means that, often times, once you’ve switched on the indicator, it’ll stay on and you have to manually switch it off. Many drivers, especially on the open roads, signalled to me that the vehicle’s indicators were still on, much to my surprise. There is that three-click option but invariably, one tends not to use it.

Built with safety in mind

The CX5 has been built with safety in mind and includes Dynamic Stability Control (DSC) that incorporates Traction Control, ABS and electronic Brake-force Distribution (EBD), which optimises braking force and Emergency Brake Assist (EBA) which then boosts stopping power when needed.

The 2.0 litre 4-cylinder petrol engine has improved power and torque to deliver a sporty 121kW of power and 210Nm of torque, using only 7.8 (at time of test drive) of fuel every 100km. On fuel consumption, I started out at around 8.5l per 100km but this settled down to 7.4l per 100km by the time I handed back the SUV (this included a combination of both urban and open road driving). The advertised consumption on this model is 6.4l per 100km but I suppose this will come once the engine has been ‘run-in’. The three-year unlimited kilometre warranty also gives one that added re-assurance.

On to the interior

The CX5’s ‘ready to pounce’ exterior look is definitely carried over to the interior as well. The model I drove did not have a sunroof – it only comes with the more expensive models.

The Connect infotainment system, a simple-to-operate system that allows easy access to internet radio streaming and social networking services – which Mazda drivers consider essential, forms part of the enhancement across the model range. I found the infotainment centre a pleasure to work with and it reminded me of the BMW’s iDrive functionality – everything you need right there at your fingertips.

Steering wheel controls and the iDrive functionality puts you in total control of audio, cruise control and Bluetooth functionality. The 7inch touch screen is also standard and the radio/CD system with six speakers pushes out very acceptable sound levels. Want the Bose sound system? Then you will have to spec up to the Individual or Akera model.

Boot space to infinity and beyond…

But one interior feature that left me with a big satisfied smile is the incredible amount of boot space (and even more space if the seats are folded down). Without exaggerating, one can easily fit four golf bags and kit bags in the back. This really appealed to me since I am a golfer and the bag, kit bag and my push cart all fit so comfortably in the back.

I also have two dogs that I take regularly to the beach and on other drives, so it was a pleasure to drop the back seats down at a pull of a lever in a fluid movement for that extra, and I mean extra, space.

The price of R373,200 incl is considered a bit too much when compared to other makes in its class.