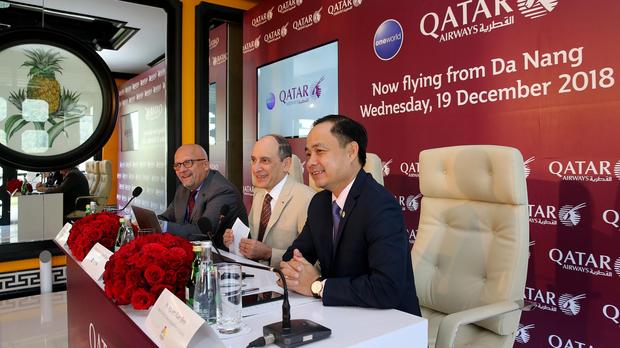 At the press conference, H.E. Mr. Al Baker highlighted the award-winning airline’s robust expansion plans, as well as its commitment to bringing more travellers to Vietnam and to connecting Da Nang to its extensive global network via the award-winning Hamad International Airport (HIA) in Doha.

H.E. Mr. Al Baker said: “We are thrilled to launch our new four-times weekly flights to Da Nang, our third destination in Vietnam. Our existing services to Ho Chi Minh City and Hanoi are incredibly popular, so we realised the need for further expansion in Vietnam. Da Nang has experienced a significant boost in development the last decade and is quickly becoming an in-demand tourist destination.

“This new gateway will offer our Vietnamese passengers more even convenience and will connectivity to an extensive choice of destinations on our global network, as they transit through our award-winning hub in Doha, Hamad International Airport.”

Deputy Director of Danang Department of Tourism, Mr. Nguyen Xuan Binh commented: “Tourism numbers to Da Nang have steadily increased over the years thanks to Da Nang’s unique landscape of coast, rivers and mountains and varied tourist attractions. Our goal is to welcome eight million tourists to Da Nang in 2020.

“The introduction of direct air services from Doha to Da Nang would undoubtedly help us reach this goal. The enhanced direct connectivity between Da Nang and Western Europe for instance would be beneficial in ramping up tourist arrivals from these promising markets, and we look forward to working closely with Qatar Airways to fulfil our ambitious tourism growth plans.”

Da Nang has also seen a tremendous increase in its number of visitors, with a record-breaking 6.6 million tourists in 2017, doubling the figure in 2013. In 2015, the New York Times also listed Da Nang among the top 52 places to visit.

Checkout the top selling smartphones in the world