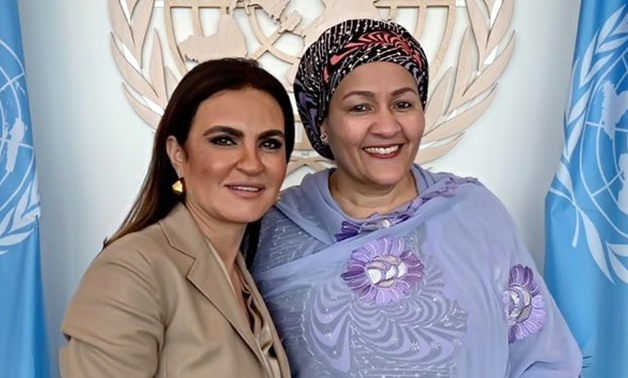 CAIRO – 16 April 2019: Egypt and the United Nations (UN) discussed supporting a number of development projects and activating the framework strategic agreement between both entities till 2022, worth $1.2 billion.

The meeting was held between Egypt’s Minister of Investment
Sahar Nasr and UN Deputy Secretary General Amina Mohamedon the sidelines of the 2019 ECOSOC Forum on Financing for Development follow-up (FfD Forum) at the UN Headquarters in New York.

The discussed development projects included supporting development in Sinai and Upper Egypt, supporting and developing a water and sanitation systems, developing the education system, health, women’s empowerment and social responsibility, according to the Investment Ministry’s statement.

The UN deputy secretary general praised Egypt’s economic reform program, stating that this program contributed to improving the economic performance which resulted in the positive indicators of the last period.

Mohamed highlighted the pivotal role Egypt plays on the regional and international levels in light of its presidency of the African Union, which helps in discussing several cooperation opportunities between Egypt and the UN. These opportunities include supporting development projects in Egypt, the UN’s role in financing private sector projects to achieve development objectives and deepen the economic relations through joint investments and intra-trade.

She clarified that the United Nations considers Egypt a pioneer in economic reforms, especially in the African continent, where Egypt comes first in the rate of increase of foreign direct investment.

The meeting discussed the role of the United Nations and international institutions in financing projects, and the participation of the private sector in achieving development goals.

For her part, the minister emphasized the government’s interest in boosting the role of the private sector in a number of public development projects, shedding light on the major legislative reforms that are set to enhance the investment climate.

Nasr pointed out that, besides the economic reform, the social aspect has been taken into consideration and support has been provided for the neediest groups. “The government is continuously working to support the neediest classes through direct and indirect support programs.”

Nasr stressed that the UN programs and framework should focus on the poorest and neediest areas in Egypt, referring to the importance of partnership with the United Nations, which comes at an important and strategic time.

The minister also met with Administrator of the United Nations Development Program Achim Steiner, where it was agreed to support Egypt’s program during President Abdel Fatah al-Sisi’s presidency of the African Union. Also,strengthening and deepening the strategic partnership between the African Union and the United Nations Development Program, especially in the field of development in the African continent and the promotion of integration projects and regional integration, was agreed upon.

The two sides also agreed to cooperate in the field of entrepreneurship, as the fund works to support development projects and encourage investments that contribute to the achievement of development goals in areas such as poverty reduction, job creation and renewable energy.

Steiner stressed the keenness of UNDP to strengthen cooperation with Egypt to establish development in the African continent, to achieve economic integration and regional integration, and to advance the African common action.

The minister asserted Egypt’s keenness to establish partnerships with various United Nations organizations to contribute to attracting investments to the African continent, stressing the importance of setting a priority to increase support for the private sector to participate in development, and stimulate the growth of emerging companies in the continent.